Install the front camera behind the rear view mirror. Install the DMS camera on the driver’s dashboard or front windshield. Install the rear camera at the top of the rear
windshield. Remove any foreign matter and clean and dry the installation area before setup. 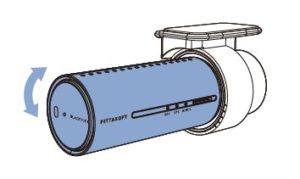 4. Insert the microSD card into the DMS. 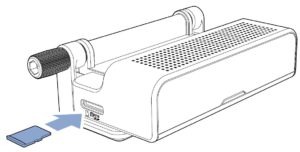 5. Peel off the double-sided tape and attach the DMS camera to the dashboard or bottom of the front windshield. Adjust the angle of the lens by rotating the DMS camera. Point the lens so that your face is visible on the DMS camera.

(Optional) For more secure attachment to the dashboard, use the screws included in the box. 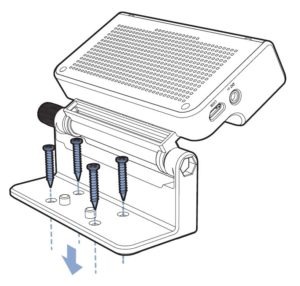 Note
• Depending on the mounting position of the product, DMS functions may not operate normally.

6. Peel off the protective film from the double-sided tape and attach the rear camera to the rear windshield. Adjust the angle of the lens by rotating the body of the rear camera.

8. Use the pry tool to lift the edges of the rubber window sealing and molding and tuck in the rear camera connection cable.

A) Multiple USB ports
B) Cover

13. Use the pry tool to lift the edges of the windshield trim/molding and tuck in the cables and the power cord.

14. Connect the power cable to the DC in terminal of the front and DMS cameras. BlackVue will power up and start recording. Video files are stored on the microSD card.

Note
•  When you run the dashcam for the first time the firmware is automatically loaded onto the microSD card. After the firmware has been loaded onto the microSD card you can customize settings using BlackVue Viewer on a computer.
•  To record in parking mode while the engine is off, connect the Hardwiring Power Cable (included in the box) or install a Power Magic Battery Pack (sold separately). A Hardwiring Power cable uses the automotive battery to power your dashcam when the engine is off. A low voltage power cut-off function and a parking mode timer to protect the automotive battery from discharge is installed in the device. Settings can be changed in the BlackVue App or Viewer