Install the front camera behind the rear view mirror. Install the interior/rear camera at the top of the front or back windshield. Remove any foreign matter and clean and dry the windshield before installation.

4. Fasten the rear camera mounting bracket using the included screws to the top of the back of the vehicle. 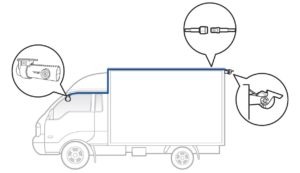 6. Use the pry tool to lift the edges of the rubber window sealing and molding and tuck in the interior/rear camera connection cable.

10. Turn on the engine. The BlackVue dashcam will power up and start recording. Video files are stored on the microSD card. When the microSD card fills up, the newest video files will start to replace the oldest video files (called loop recording) – so you will always have the most recent video files.
11. Turn off the engine. The dashcam will automatically stop recording and power down. To record in parking mode while the engine is off please connect the Hardwiring Power Cable (included in the box) or install a Power Magic Battery Pack (sold separately). A Hardwiring Power Cable uses the automotive battery to power your dashcam when the engine is off. A low voltage power cutoff function and a parking mode timer to protect the automotive battery from discharge is installed in the device. Settings can be changed in the BlackVue App or Viewer.
12. Locate the fuse box to connect the hardwiring power cable.